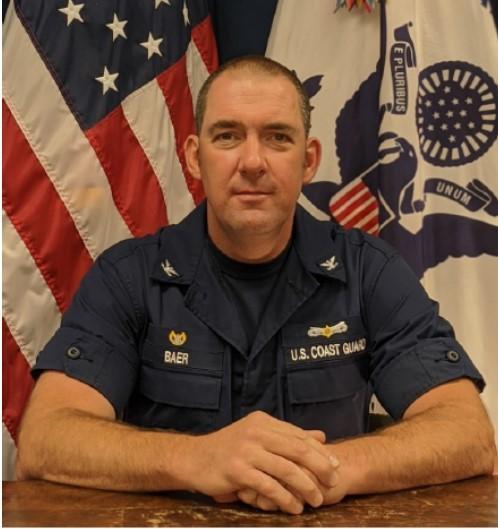 Captain Matt Baer is an Officer in the United States Coast Guard who graduated from Chestnut Ridge in 1994. He attended the U.S Coast Guard Academy in New London, Connecticut, graduating and earning his commission in 1998.  He also attended the Harvard Kennedy School, where he obtained a Master’s of Public Administration in 2008.   Matt’s wife Lindsay is a 7th-grade teacher and he has two children, Grace and Samuel.


Captain Baer participated in Football and basketball in high school, eventually playing football while in college. He recalls how caring all the teachers were at Chestnut Ridge during his time as a student. His favorite courses were Mr. Oldham’s Physics and Mr. McEroy’s Chemistry classes.  He also enjoyed taking French with Mrs. Diehl. Three weeks after graduation, he attended Coast Guard Boot Camp.  His 24 years, and going, in the Coast Guard has allowed him to travel all over the country.  He has served up and down Western and Eastern seaboards during his career while also spending time in the Caribbean doing counter-drug operations and humanitarian missions in American Samoa. Currently, Captain Baer is the Commander of Sector North Carolina. As a kid, his family vacationed in North Carolina, where they would often travel past the Coast Guard Station in Ocracoke, his first inspiration to join the service.  Now, that station is under his command.


“My advice to current students would be to keep it simple, have fun, and enjoy your time at Chestnut Ridge High School. Participate in teams, whatever that looks like. Because life is full of being on one team after another. It is not just sports, it can be work teams, project teams and you can learn a lot about yourself with how you interact with others.  Sometimes we lead, sometimes we follow, sometimes it's best to get out of the way. Ultimately, you will need to work with others to succeed.  Lastly, know that you are coming from a great place.  Bedford County is a great place to grow up. I look back fondly on my time there and my wife and kids enjoy our time visiting every chance we get.”