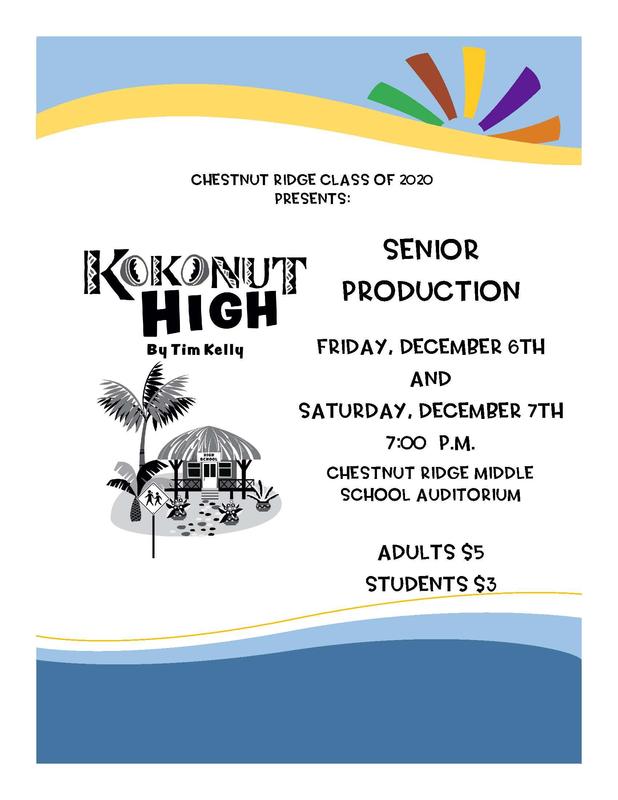 Tired of the cold weather?  Come to our tropical island and warm up with laughter.

Kokonut Island residents must do something to earn some money on their hurricane devastated island.  They decide to open Kokonut High, a private high school that guarantees a diploma to every student (in exchange for a hefty tuition fee, of course!).  Along with the handful of students that show up, a crime syndicate also comes to the island and wants to take it over.  Adding another layer of hilarity, the ghost of Cap’n Kidd shows up, demanding that everyone get off his island...  or else!  Swampy, an eccentric island resident with a drop of genuine pirate’s blood in his heritage, is the only one who can see him.  No wonder everyone thinks Swampy is cuckoo on Koko!  A mad crew of characters walks the island:  disgusted guests, outraged parents, long-lost newlyweds, carefree students, sneaky guests, Coast Guard personnel and two girls who think they’re going to marry the same boy (they’re not).  Plus, who can ignore the lady in a fur coat and someone trying to pass herself off as the Russian Princess Anastasia?!  Matters go into high gear when an accreditation team from stateside shows up demanding to meet the faculty.  Since there isn’t any, what to do?  Sides will split with laughter when events build to an uproarious finale.  This show boasts fast action, jokes galore, and a plot that moves like a hurricane.